The Birmingham Commonwealth Games ended a few days ago and they broke all previous records for lgbt inclusion. But first, I’d like to reveal that lgbt participation goes way back to 1934 and the first known lgbt athlete at the Commonwealth Games (then called the British Empire Games) was Edwin Halstead (1907-1962). He competed under the name of Edith Halstead and won the silver medal in the women’s javelin competition. Not much is known about his personal life and I have very little to tell you, except that he transitioned before 1944. I’m digging around for more information and will tell you what I’ve found next month when I write about a special sporting centenary.

I had hoped to publish the updated list of Commonwealth Games athletes today. Unfortunately, some errors in the list were noticed at the last minute and I’ll publish it later this week after I’ve been through it again. Thanks to Jon Holmes of Sports Media LGBT+ and Pride House Birmingham for helping to compile this list and for spotting the errors. Errors like this have been dogging me all year and is affecting my ability to produce accurate information. I hope it is just “old age”! The information below has been double-checked and is correct at the date of publication.

The prelude to the Birmingham 2022 games, as mentioned in my previous article, was the Queen’s baton relay. I mentioned Lauren Price being among the first baton bearers as it left Buckingham Palace in 2021. Here are a handful of the other lgbt baton bearers with date and locations.

Jason Watson, a.k.a. Jsky, BBC Radio Manchester and Gaydio presenter: 18 July 2022, Salford, Greater Manchester, England. (Jsky claims to be the first baton bearer to do so wearing high heels. This is unverified.)

On several occasions the Queen’s baton relay ventured into the heart of the lgbt community. It was welcomed onto the stage at Cambridge Pride on 10th July, and went into Birmingham’s Gay village on 27th July. The last time anything like this happened was when the baton visited Toronto Pride House during the 2014 relay.

On the last day of the relay the relay encountered a protest by veteran activist Peter Tatchell. With a small group of supporters he was protesting against the criminalisation of homosexuality in many Commonwealth nations.

The relay culminated with the entry into the stadium during the opening ceremony on 28th July, carried by Olympic and Commonwealth diving champion Tom Daley. Accompanying him were six lgbt activists, each carrying a Pride Progress flag. This official statement made by the Birmingham 2022 organising committee also highlighted the homophobia around the Commonwealth.

Birmingham 2022 can be called the Rainbow Games. The official presence of any lgbt flag during the opening ceremony is ground-breaking in itself, but the Commonwealth Games Federation made it very clear in December 2021 that there would be no objection to athletes carrying a rainbow flag onto the medal podium. This is in stark contrast to the Olympics. But, as we have seen at recent Commonwealth Games and Olympics, there’s nothing to stop spectators waving a flag.

The Pink Jack, the gay version of the UK’s national flag designed by David Gwinnutt, was seen several times at the aquatics centre. There was also a less well-know flag there on other days. The image below shows the Scottish version of the Rainbow flag depicting the Scottish lion. 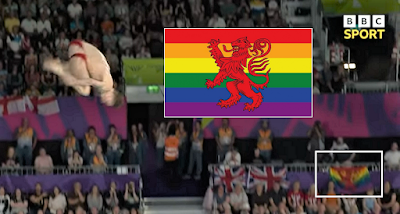 Rainbows didn’t always appear on flags. The captains of the UK home nations (England, Scotland, Wales and Northern Ireland) wore rainbow armbands in their matches. Similarly, Australia’s women’s rugby sevens captain, Sharni Williams, who wore rainbow headgear. More rainbows were spotted at other competitions. But the most rainbows in one place occurred during the opening ceremony. Every member of Team England wore badges of the Pride Progress flag.

However, one important flag was absent. With hype surrounding homophobia in the Commonwealth there was no visible attention made to the exclusion of transgender athletes. In all my recordings of the events and review of other media I could see no transgender flag or statement from athletes about transgender inclusion, which has been a prominent debate this year. Double standards? After all, the Commonwealth Games is primarily about sport.

Earlier this year US swimming debated the inclusion of transgender athletes in women’s competition, sparked by the successes of Lea Thomas. There was a similar debate in British cycling over Emily Bridges which led to her being excluded from elite competition. As long as sport is divided into two gender categories the debates will continue into the foreseeable future.

Here are some statistics from Birmingham 2022, which will obviously change as new information comes to light. There were 46 confirmed out lgb+ athletes (no transgender athletes), more than three times the number listed at the time of the previous games in 2018, 13 (a further 24 came out or have been identified since then). Only 5 athletes in Birmingham competed in male categories (compared to 6 out of the 37 athletes in 2018). Twelve out of the 72 competing nations had lgb+ athletes, ranging from the most populous Commonwealth nation, India, to one of the least, the Falkland Islands.

A total of 16 members of Team LGB+ won medals in 8 events – 7 gold, 3 silver, 6 bronze. All were won by female athletes. For the purposes of the official medal table they count as 5 gold, 2 silver and 4 bronze, because team sports count as one medal even when all team members receive one each. This made Team LGB+ finish 14th on the final medal table (duplicating team medals with their national medals to take into account non-lgbt team members, and transferring individually-won medals from national scores into Team LGB+). Only one athlete, English squash player Sarah-Jane Perry, won more than one medal (1 silver, 1 bronze). All but 2 athletes finished in the top 8 in their event. No male athlete finished higher than 6th place, the first time since the 1970 games in Edinburgh, Scotland, that no men won medals. At the moment, even though more athletes competed in 2020, their overall results are lower than in 2018.

What does the overall lgbt medal table look like? Australian swimmer Ian Thorpe remains at the top with 10 gold medals and 1 silver. Five of the athletes making their Commonwealth debut in Birmingham (Ashleigh Brazill, Rachael Haynes, Jess Jonassen, Tara Llanes and Megan Schutt) went straight into the top 30 with their gold medal wins.

The highest climber from the pre-2022 table was boxer Michaela Walsh (Northern Ireland’s flag carrier at the opening ceremony) who moved up from 38th place to 17th with her gold medal adding to her previous 2 silvers.

The most successful nation was Australia (no surprise there) with 5 athletes winning gold medals in 3 events (cricket, netball and rugby sevens). Their netball win was Australia’s 1,000th Commonwealth gold medal.

I could be here for days rolling out information and statistics, but I think this is enough for now. If there are any specific statistics you’d like to know please ask in the comments below.

If there’s one thing to take away from all this, to balance the negative issues surrounding lgbt inclusion in sport and the Commonwealth, is that we should realise we have seen a huge increase in lgbt visibility and participation in both the Commonwealth Games and the Olympics over the past four years. Long may it continue.

Posted by Tony Scupham-Bilton at 08:47