More Lgbt Olympians Than Ever

For up-to-date information on the opening day of Tokyo 2020 go here.

There’s only just over a year until the Tokyo 2020 Olympic Games kicks of with the lighting of the Olympic flame at Olympia on 15th March 2020. Here are my updated lgbt Olympian lists. I had hoped to come up with a new format but haven’t had time to come up with one. Hopefully I will by next year.

The number of lgbt Olympians still grows. On average I add 2 new names every month.

Below are the new lists. I have split the Summer and Winter games into separate lists. The Winter list also includes the known lgbt athletes who competed in Olympic trials and qualifying tournaments, plus a handful of coaches, judges and officials.

One of the exciting prospects for Tokyo 2020 is that there could be the high probability that there will be 100 out lgbt Olympians at the same games for the first time. It is also likely, given past experience, at least 2 athletes will come out during those games.

While it is still a concern to many that there are two few openly lgbt Olympians it may be encouraging to know that there is a large number who compete in trials and qualifying tournaments who don’t perform quite good enough to be selected for their national team. To illustrate this I’ve produced the table below in which I show the total number of known lgbt athletes who aspire to Olympic selection against those who succeed.

Bear in mind that the number in the Trials column are those who competed in trials and qualifying events but were not selected for the Olympics. For the complete total of lgbt athletes just add the Trials and Olympics figures together. For example, 6 lgbt athletes competed in the trials, etc., for the 1956 Melbourne games but only 3 were selected and competed at the games while 3 weren't.


Looking at the figures there are some interesting conclusions to make. First of all, we can see that the number of lgbt athletes has already exceeded 100 if we take into account those who competed in trials, with London 2012 taking us to 109. Secondly we have to rake into account that the number of athletes of all sexualities vastly outnumbers the one who made it onto their national Olympic team. In sports such as swimming or track and field there could be hundreds of competitors in the national trials, particularly in the USA, and only 3 spaces available for the same Olympic event.

This in itself gives us a more optimistic overview of lgbt athletes. Look at the figures for the 1976 Innsbruck Winter Games. There were only 4 known lgbt athletes at the games, all of whom competed in the trials. That’s a 100% success rate, however small the number.

If we need to decide which Olympics can be considered as the best with regard to lgbt conclusion (in terms of numbers rather than percentage) then it has to be Sydney 2000. Of the 71 known athletes who competed in the trials and qualifiers only 7 didn’t make it to Sydney. That’s a lower number but a higher percentage than either London 2012 or Rio 2016 where over 100 competed in trials.

If you study the figures more closely I’m sure you’ll find something that reveals positive trends that are hidden underneath the official Olympic numbers.

I hope you find these tables and charts of interest, and bear in mind that ongoing research could easily make them out of date within a month!

That’s it for LGBT History Month UK. I’ll be back in April with another month of lgbt heritage, which will include an article to celebrate the 10th anniversary of the Mr. Gay World contest, the 600th anniversary of the death of Leonardo da Vince, and a look at one of the darkest and most far-reaching legacies that a member of the lgbt community has ever produced.

Posted by Tony Scupham-Bilton at 07:48 No comments:

The Forgotten Victims of Franco 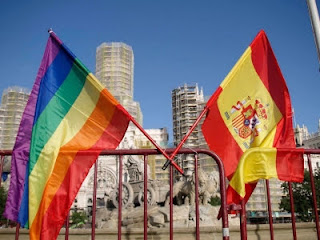 Eighty years ago this month the Spanish Civil War was nearing its end. On 27th February 1939 Britain and France recognised the government of Gen. Francisco Franco and his Nationalists as the legitimate government of Spain. The war went on for several more months until Franco declared the war had ended on 1st April.

Until Franco came to power Spain’s lgbt community had “enjoyed” a higher degree of freedom than most of Europe. Sodomy had been decriminalised in 1882 and the Second Republic (1931-1939) had been more liberal than the preceding monarchy. The power of the aristocracy and the Catholic Church had been reduced.

All that changed when Franco took over. The Catholic Church regained its political powers and things like abortion and divorce were made illegal. Although there was no new law re-criminalising homosexuality or sodomy the lgbt community saw an increase in opposition and victimisation.

In 1954 Franco reformed Spain’s 1933 Vagrancy Law to include homosexuality, thereby making it illegal once more. To the Nationalist government this was a step made to “correct and reform” homosexuals rather than punish them. But punish them they did with harassment, arrest and torture. In 1971 homosexuality was declared a mental illness rather than a crime with the introduction of the Law of Dangerousness and Social Rehabilitation. Gay men were sent to “correction camps” for “corrective treatment”, or physical and psychological abuse, as we would recognise it today.

Even after months of this forced “therapy” convicted homosexuals had little chance of finding employment afterwards as the police would inform employers of their employee’s record as a homosexual.

When homosexuality was legalised once more in Spain in 1979 (40 years ago this year) several years after Franco’s death, democracy, the monarchy and more liberalism were introduced. However, men and women who had been still convicted for their homosexuality were still being discriminated against. In 1976 the Spanish government issued pardons to all political prisoners under Franco, but not to homosexuals as it was still classed as a “mental Illness” that required “correction”.

It wasn’t until this century that the Spanish government decided to finally wipe out the convictions of all those who were convicted of homosexuality or underwent treatment. Homosexuality had been legalised two years earlier. Those who had been affected felt that there should be more than a pardon. More than anything, many of them called for financial reparation to cover the hardships they had endured because of their convictions.

In 2004 the Association of Ex-Social Prisoners of Spain was formed. Antoni Ruiz, its president and one of Franco’s victims, had been arrested and convicted of homosexuality in 1975. He was jailed, raped by other prisoners and subjected to psychological torture by the prison authorities. After years of campaigning the government agreed to give financial payments to Ruiz and all surviving victims of Franco’s homophobic laws. In 2009 Antoni Ruiz was the first to receive any of this compensation, receiving 4,000 euros.

Each case for compensation that goes before the Commission for Compensation of Former Social Prisoners is treated individually. As of January 2018 only 116 people had been successful in their case. I have no data for the thirteen months since then.

While the persecution of gay men and women by the Nazis has become deeply engraved into lgbt heritage the persecution in Franco’s Spain, which went on long after the Nazis were defeated, has gone largely unnoticed outside Spain. Unlike the Holocaust there are no memorials to Franco’s lgbt victims and many people today are surprised that Spain, a nation that has been in the forefront of lgbt rights in the 21st century, has had such a recent homophobic past. 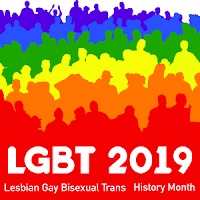 Posted by Tony Scupham-Bilton at 07:33 No comments: