Tokyo: The Wait is Over

There’s going to be a lot of statistics in this article, so I apologise in advance if you get confused. The data is as correct as possible on Thursday 21st July 2021 at 7 a.m. GMT (UCT) +1.

With Cyd Ziegler of Outsports I have again compiled a list of openly lgbt athletes at the Olympics. Let’s call them Team Out. It’s a record number, and this is sure to increase as more athletes are identified. Check out the list here.

First, a comparison to the previous record-holding Olympics, the Rio 2016 games. Outsports published its first Rio list of 27 names on 11th July 2016. By the start of the games on 5th August it had 49, and at the end of the games it had 55. Since then, a lot of Rio athletes have come out and have been identified, so that today my complete list of lgbt Olympians who were at Rio is at 151.

Outsports’ first Tokyo 2020 list, published on 12th July, had 121 names, so records were being broken before the games started. Today, there are over 160 names.

There are over 90 Olympic newcomers, another record. Most newcomers are under 30 years old, all born during an era in which lgbt sport has been slowly gaining acceptance, though there is still a long way to go. Many young athletes are coming out during their college years rather than waiting until they’ve retired, as has often been the case in previous decades.

Let’s look to the returning Olympians and their previous performances. There are several ways of counting medals and places – by event or by individual athlete. For example, the official medal table counts team events as one medal, and doesn’t count each individual player in the team.

On the last day Rio 2016 a total of 25 individual members of Team Out (excluding those identified as lgbt after Rio) had won medals in 14 events (5 gold, 6 silver and 3 bronze). This placed them 17th in the final medal table. As of today, adding the athletes identified since Rio, Team Out is 8th, with 10 gold, 16 silver and 5 bronze medals in individual and team events (won by 59 athletes if you split team medals into individuals).

I’m going to make some predictions. There are 64 medal events in which members of Team Out are competing. I believe there will be at least 80 individual members of Team Out who will win a medal in 40 of those events. Predicting Team Out’s place on the final medal table (counting events, not individuals) I think it is probable that they will be ever higher than Rio’s 8th position.

Below are medal and placings tables for the returning Olympians. It shows how many medals they have won as individuals. It should not be compared to national medal tables which only count events, not individuals.

I’ve split the table into two. The first portion shows the medal winners and the second the non-medal winners. Both tables include each athlete’s position up to the 8th place. The International Olympic Committee (IOC) awards diplomas to athletes who finish in the top 8 in most sports. These diplomas are highly sought after by collectors and, depending on their condition and the athlete who received it, a diploma can fetch up to $1,000 US, more than some gold medals.

So, the tables. The columns show the athlete’s name, nationality and sport, followed by the 8-place finishes.

The last two columns show the athlete’s place in the all-time summer lgbt Olympian medal table, then their place on the all-time lgbt Olympian medal table if you include the Winter Olympians. Let’s take Brittney Griner to explain those figures. Her last two columns show 49= (28) and 64= (33). The first means that she is in equal 49th position in the all-time summer list, and that she is one of 28 athletes with the same medals and placings. The second figure means Brittney is in equal 64th position among 33 athletes if you include the Winter Olympians. I hope that makes sense. 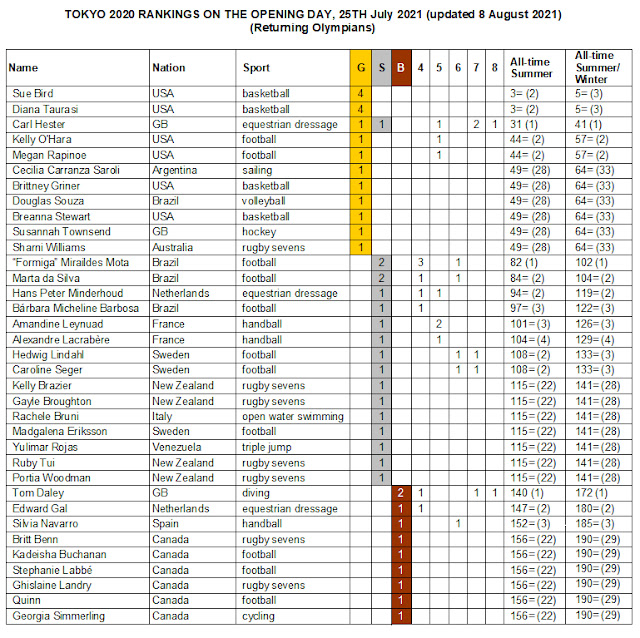 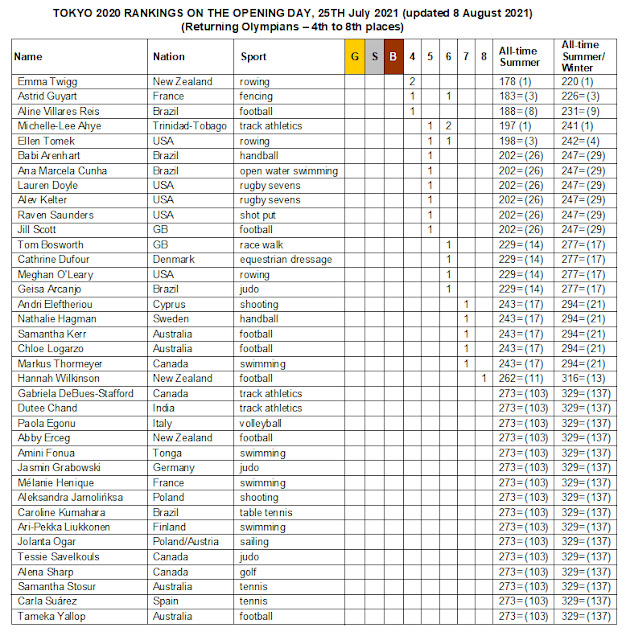 Several other facts before I go. The Brazilian footballer Miraildes Mota, commonly called “Formiga”, is making her 7th Olympic appearance, the record number of competitive appearances by an lgbt Olympian. She is probably the only Olympian to have competed in every tournament since her sport was introduced last century (women’s football, introduced 1996).

Formiga is also one of the two members of Tokyo’s Team Out who competed in an Olympic Games before 2000. The other is British dressage rider Carl Hester who first competed in 1992 (Tokyo is his 6th Olympics). Carl is also the current record holder as the oldest lgbt competitor (at 54) and the oldest lgbt medallist (a silver in Rio, aged 49).

If you see the opening ceremony try to stay awake long enough to see the flag-bearers. An innovation this year is for nations to have two flag-bearers if possible, one male and one female. There are five lgbt flag-bearers in the parade (Rio 2016 had 3) – Cecilia Carranza (Argentina), Andri Eleftheriou (Cyprus), Kellie Harrington (Ireland), Sue Bird (USA) and Yulima Rojas (Venezuela). Not only are they waving the flag for their nation but they are waving them as proud members of Team Out. Many gay men will be eagerly looking forward to Tonga’s flag bearer, the oiled-up muscle-boy from Rio 2016 and PyeongChang 2018. His predecessor at London 2012 was gay swimmer Amini Fonua (fully clothed). Amini probably won’t be in the parade tomorrow because his first race is the day after.

I’ll return to the medal table after the games and review some of the most significant events.

UPDATE: Since this article was published, many more lgbt Olympians have been added to the Tokyo list. The original tables have been updated to include the new listed names that are returning Olympians.

Posted by Tony Scupham-Bilton at 08:00