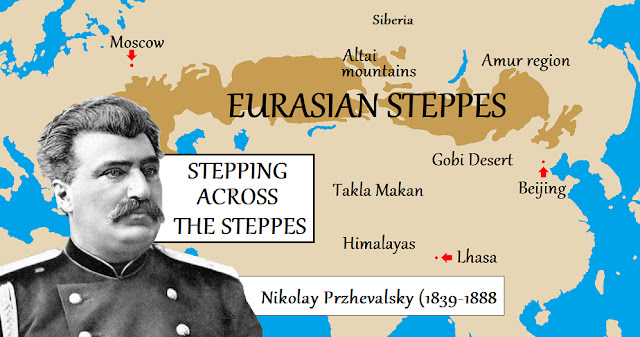 In ancient times the steppes of Eurasia were a cross-continental trade route long before the Silk Road from China was developed. When the Silk Road became dominant the steppes route faded away. Apart from a few nomads and settlers not many people ventured that way. It was over 600 years before a Russian explorer, Nikolay Przhevalsky (1839-1888), ventured into these forgotten lands.

Today Nikolay Przhevalsky is best known for having a species of small horse named after him. But, although not a naturalist, Nikolay is also commemorated with many other animals and plants being named after him. His exploration into the East Asian deserts and mountains provided much new scientific information and revealed the Europe the sheer natural diversity of this remote region. Nikolay made five full expeditions, and today I’ll tell you about the first few.

Nikolay followed family tradition by going into the army. However, he found military life tedious and he read books on travel and exploration which fired his imagination. He became particularly interested in exploring the wilderness beyond the Eurasian steppes. His military training taught him all aspects of reconnaissance and surveying that all army officers learnt to help them to plan military campaigns. This would help Nikolay to plan his expeditions.

At the military academy Nikolay wrote a dissertation on all that was then known about Amur, the remote East Asian territory annexed by Russia in 1858. The dissertation was so comprehensive that the St. Petersburg Geographical Society made him a member.

In 1867 the authorities funded his first expedition to the Amur region. Nikolay persuaded them to pay for a “personal assistant”. He would have one of these on all his expeditions, always a young man or teenager who would act as his protégé. These young men were the focus of Nikolay’s sexual urges, as evidenced in his letters, and were all probably platonic.

In summer 1867 he set off on his first expedition. It took him across tundra and lakes and down rivers through remote villages and Cossack settlements. The summer frosts thawed and melting mountain snow swelled the rivers. The whole ground was wet and boggy and was a breeding ground for gnats and mosquitos. Camping out in this environment was certainly not very pleasant. The almost constant July rain also made it virtually impossible to dry the plants and animal skins that were collected. Despite these difficulties the expedition was a huge success and Nikolay wrote up his journals into a book. This was to make him famous, allowing more expeditions to be planned.

In 1870 Nikolay’s second expedition went across the Gobi Desert to Beijing through some of the least explored parts of the Mongolian region. More plant and animal specimens were collected and the route was thoroughly mapped. This expedition also instilled in Nikolay a hatred of all things Chinese. He hated the food, he hated the culture. He was blatantly racist and hated anything that wasn’t European. He wrote that “…only the rifles and cannons of the Europeans can do any good here”. In truth, China was in a state of decline and Nikolay never saw the splendour of its heyday.

Nikolay’s third expedition began in 1876. He had ambitious plans including a visit to Lhasa, the remote capital of Tibet, a city no European had ever seen. The route across Siberia took the expedition through scorching heat to the Altai mountains. Several pack animals died and local guides proved unreliable. The most ambitious section was to cross the Takla Makan, a desert so inhospitable that its name means “you go in, but you don’t come out”. But come out of the desert they did, following a chain of oases.

Eventually Nikolay arrived at the near-mythical lake of Lop Nor, whose existence was only previously recorded by Marco Polo and which had recently been rediscovered. Then the expedition moved west to explore the mountains that separated Takla Makan from Tibet. Nikolay caught an infection and his young protégé developed a fever. Despite this Nikolay carried on. The heat was unbearable. A lot of wells had virtually dried up and scorpions scuttled into their tents at night. Nikolay’s infection worsened and soon riding a horse was too painful because of the itching sores and an abscess on his back-side. The colder autumn eased the itching but Nikolay was so weak by now that a makeshift cart was made to transport him. Even though physically incapacitated he was still very much in charge.

Several other members of the expedition caught the same infection, and then Nikolay learnt of the death of his other during the summer. He and the expedition became depressed and despondent and Nikolay decided to abandon the venture and return home, if for no other reason than to recover fully from his infection.

It wasn’t long before Nikolay organised his next expedition that would take him into Tibet. He set off at the beginning of 1879 and with 23 camels carrying food, provisions, equipment, guns and home-made strawberry jam (a gift for the Dalai Lama), the expedition made its way to the frontier post of Zaysan in the Altai Mountains.

It was there that Nikolay was presented with an animal skin by a local chief. It was the skin of a small horse. Nikolay sent it back to St. Petersburg where it was examined and confirmed as a new species. It was later named after Nikolay – Przhevalsky’s horse. Nikolay finally got to see a living specimen for himself in May 1879.

After resting at Zaysan for a while Nikolay and his expedition began to move towards Tibet and the fabled city of Lhasa. Did he make it? Sorry to keep you in suspense, but I’ll tell you next month.
Posted by Tony Scupham-Bilton at 10:39 No comments:

Out Of This World: Asteroid Update

It’s been a while since I gave a list of asteroids (minor planets) named after members and allies of the lgbt community. So here’s a new selection. The number before each name is the official number designated to that asteroid. The explanation following each name is based on the citations given when the names were published, to which I’ve added information illustrating relevance to the lgbt community. The numerical order of asteroids is not necessarily the same order in which they were either discovered or named.

You may wonder why some asteroids are not named until many years after they were discovered. There’s several reasons for this. Once discovered an asteroid is given a reference number. No asteroid is named until it’s compete orbit has been calculated, and this may take some time because there may be very few observations on which to make an accurate calculation. The final number of the asteroids, the ones you see listed below, were assigned at the same time as their name. Many asteroids are only known by their number for several years until someone decides to give it a name. Some asteroids are named for a specific reasons, as in the case of the one named after Freddie Mercury below. 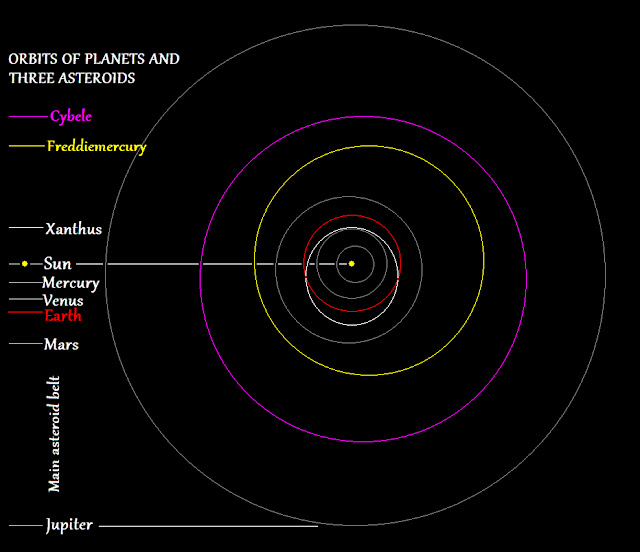 Through all my “Asteroid Updates” I’ve not shown you where any of them are. You may have a vague idea of the asteroid belt between Mars and Jupiter. Most asteroids orbit there. Only very large telescopes can see them.
This illustration above shows the orbits of three of the asteroids I’ve listed today in relation to the orbits of the major planets of the inner solar system. The illustration isn’t exactly to scale (the Sun would be less than a pixel and not a yellow dot) but the general orbits are in their correct relative position, even down to the fact the Sun is off-centre.
Orbits of the planets are in grey except for the Earth, which is in red. The orbits of (65) Cybele, (4544) Xanthus and (17473) Freddiemercury are shown in different colours.
Cybele is one of the outermost asteroids in the main belt. There are many other asteroids that go beyond which we don’t need to concern ourselves about today. You can probably see that the orbit of Xanthus, as a member of the near-Earth-orbit asteroid of the Apollo group, crosses our orbit twice a year. Just like the asteroid Apollo itself Xanthus could hit us in the far and distant future.
Posted by Tony Scupham-Bilton at 08:54 No comments: