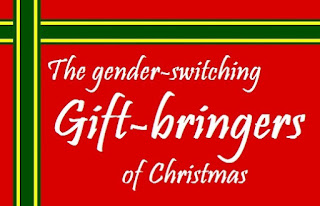 Over the past three Sundays I’ve presented some results of research into Christmas gift-bringers and characters. I’ve shown how some of them have changed gender over the centuries, and that some of them have often been played in traditional customs and pageants by someone of the opposite gender.

The terms “cross-dressing” and “drag” have become too associated with expressions of gender and sexual identity. Today I’ll be using an additional term. In the performing arts the term “travesti” is used to describe the portrayal of a character by a person of the opposite biological gender, regardless of whether that person is lgbt or not (to confuse matters even further, I’ll not be using the term “travesti” as used in South America for transgender people).

As with a lot of things, travesti roles began in ancient times. Here we have to make another distinction. Historians and academics often give the impression that ancient communities never did anything that didn’t involve religion and worship. The buzz word “pagan” appears like a virus, spreading through research and literature to explain everything we don’t have evidence for. What very few historians mention is that some traditional customs could have originated because people just wanted to have fun and let their hair down. Children role-played for fun just as they do today. Fun and faith went alongside each other, just like our modern Christmas. The Roman festival of Saturnalia, often erroneously quoted as being the origin of Christmas, is an example. So little is known about Saturnalia that no-one knows what they did except have wild parties. Evidence does suggest, however, that role reversal took place, but none to suggest it involved cross-dressing.

Some activities in religious festivals seeped into secular life, and vice versa. Today it is often impossible to say which effected the other the most. As far as cross-dressing in concerned, many pre-Christian religions had male priests who wore female masks in some ceremonies. Female masks have been found in Greek temples dating to 5,000 years ago. They were also used in Greek theatre in both comedies and tragedies.

The early Christian Church frowned upon cross-dressing, teaching that it was immoral and antisocial. It even became illegal to cross-dress in public in many nations. However, if the person (a man) was doing so as part of a theatrical performance, it was okay. This explains why the Church accepted travesti roles in religious ceremony. During the Middle Ages processions and portrayals of Biblical stories were popular. They were a way for the Church to inform the ordinary people who couldn’t read about Bible stories. This gave rise to the Passion plays of Easter and the Mystery plays of Christmas. In both of these plays female roles were played by men, even the role of the Virgin Mary.

During the Middle Ages communities began to organise their own little celebrations. The Mystery plays evolved into community “mumming” plays in which comedy, parody and travesty were common. Celebrations were also often adapted from local folk customs. In central Europe many of these customs took place in winter around Christmas or the winter solstice. Christian elements were added to these customs, and celebrations of the arrival of St. Nicholas to distribute gifts on December 6th was among them. St. Nicholas didn’t become associated with Christmas or gift-bringing until the 12th century, so we can be sure that these new customs don’t date before that. There’s no written evidence for most of them until the 19th century. Last week I gave a few examples of these customs in which St. Nicholas’s wife is played by a man – like the Wiefke of the Klaasohm and the Nikolowiebl of the Buttnmandllauf customs. These were acceptable to Church, State and society because they were regarded as performance, not a life-style choice.

In several countries from the 17th century there are records of groups of men who gathered and cross-dressed in private clubs – the Molly houses of the UK, for example, and various bars in the USA. Some of these men performed (sing, dance, recite, play an instrument) for the amusement of the others. This is where modern drag originated.

An event in 19th century London about a couple of men renowned for cross-dressing on stage hit the headlines. Their names were Ernest Boulton (1847-1904) and Frederick Park (1847-1881). They have a kind of Christmas connection - Park was baptised on 5th January (Twelfth Night) 1847, probably being born around New Year’s Day, and Boulton was born on 18th December 1847 (his birthday was yesterday).

They performed under the stage names of Stella Graham and Fanny Park and became quite famous. They even had publicity photographs taken of them in their drag costumes. Sadly, because cross-dressing in public in England was illegal at the time the pair were arrested outside the Strand Theatre in London in 1870. This was, however, not the first time that they had appeared in public dressed as women. Both had appeared in court on previous occasions relating to their cross-dressing. They were put on trial for outraging public decency and sodomy. The public followed its progress closely and the courtroom was often overcrowded.

Their first trial dealt with the charge of sodomy. The prosecution insisted that the fact that Boulton and Park were homosexual (a new word at the time) “proved” they were guilty. Many witnesses gave damning evidence against them, though the judge criticised the means by which some of that evidence was gathered. The jury took less than an hour to find Boulton and Park not guilty. This caused great rejoicing in the courtroom and Boulton fainted. A few days later they pleaded guilty to the charge of outraging public decency, thus negating a trial for that offence, and they were bound over to “keep the peace” (a sort of probation) for two years against a fine of 500 guineas. Both returned to the stage and toured in England and the USA, though not together, and not very often in drag.

When Boulton and Park were performing British theatre was experiencing its heyday. It was the period when the modern tradition of British Christmas pantomime (nothing to do with miming) acquired its present form. Some of that tradition came down through the medieval mummers plays. It also evolved out of the Italian “commedia dell’arte” tradition which featured characters like Harlequin, Columbine and Pierrot. Add a big influence from Victorian Music Hall (burlesque) and you get the pantomime that the UK loves to this day.

What people love about pantomime is the comedy, the songs, the spectacle, the slapstick, and above all, the stories and characters. A good traditional pantomime usually has two leading travesti roles, one played by men, the other by a woman. The pantomime dame is the most important. This is always a man in drag, usually a well-known comedian, appearing in ever-increasingly outrageous or elaborate costumes. The travesti dame role first appears way back in 1731 in “Dick Whittington”, my favourite pantomime. Dame roles became more frequent and popular in the final days of Music Hall. Another feature is that the dame has pockets full of sweets and she regularly throws them into the audience, though this has no connection to the Christmas gift-giving of the characters in traditional customs.

Perhaps because of its outrageousness and opportunity to slip in many sexual innuendos the dame character has been played by many gay actors – Sir Ian McKellen, Douglas Byng, John Inman, Wayne Sleep, Danny la Rue, Stanley Baxter, Christopher Biggins, Jack Tripp, Paul O’Grady, the list is endless. Sometimes the dame is the villain, like the two Ugly Sisters in Cinderella.

The other travesti role in pantomime is that of the Principal Boy, always played by a woman. This character is often the hero of the pantomime – Aladdin, Dick Whittington, Robin Hood, Peter Pan, Prince Charming, etc. In recent years, certainly since the 1960s, these roles have often been played by young men, usually the most famous pop star of the day.

So, there you have it. The pantomime dame is a descendant of the medieval Christmas processions and Mystery Plays in which the Virgin Mary was played by a man. The Mystery Plays evolved into mumming plays in which comedy and over-the-top characters helped to inspire the first British pantomimes and the dame.

If we look at the history and development of Christmas and its many gift-bringers we find that there is no single influence or ancestor. What began as a Christian festival has lent its name to many celebrations, traditions and customs held during the Christmas season that have evolved over time. Just like our own family trees, many influences and many people and places have produced what we have today.

This is my final article of 2021. Thank you so much for being with me through this year, and I hope you’ll stay with me in 2022 when we’ll kick off with a list of January birthdays, and in mid-January look forward to the Beijing Winter Olympic and the newest list of lgbt Winter Olympians.

Have a very Merry Christmas and whatever festival and celebration you observe, and a Happy New Year.

Posted by Tony Scupham-Bilton at 09:23