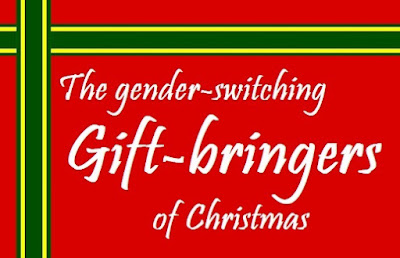 For most of this year I’ve been doing research for a board game based on the world’s many Christmas gift-bringers. There are almost 100 characters, past and present, who bring gifts throughout the Christmas season, starting with St. Martin (on November 10th) through to Sagaan Ubgen, a Russian-Mongolian “New Year Wizard” (whose gift day is based on a lunisolar calendar and can be on any date between January 24th and March 3rd).

Santa Claus has been slowly been killing off traditional regional gift-bringers. In a world that encourages diversity I think we should rediscover these disappearing characters. Thankfully, many ethnic and regional Santa alternatives have been emerging since the 1990s.

An area that has been growing, or should I say returning, to the lgbt community is gender diversity. I’ve written many articles on gender variance in history. This is reflected in seasonal gift-bringers such the Three Kings whom historians suggest may have been third-gender. Other gift-bringers have changed gender in the past, sometimes intentionally, sometimes not. This Advent I’m looking at the gender-switching representations of Christmas gift-bringers, and I begin with the person after whom the Christian Church and Christmas get their names, Jesus Christ.

The evolution of many gift-bringers makes a labyrinth look like a straight road. The evolution of the baby Jesus into Santa Claus is an example. The baby Jesus is also called the Christ Child – Christkind or Christkindl in German-speaking nations. He didn’t become a Christmas gift-bringer until the 16th century when Martin Luther (1483-1546), founder of the Protestant Reformation, called for the abandonment of Catholicism and anything that hinted at it, including saints. St. Nicholas was the major Christmas gift-bringer across Europe at that time, delivering presents on his feast day of December 6th, as he still does in some countries. Luther encouraged the adoption of the Christkind as a Protestant gift-bringer. At the same time he suggested moving the gift day from December 6th to December 25th.

At first the German Protestant Christkind wasn’t represented in physical form as Santa Claus is today in countless shopping malls. How this changed, switching gender in the process, involved angels and the Nazis.

By the 18th century angels were regularly portrayed in art and churches as young girls or women. Around the same time the Christkind began to be portrayed not as a baby but a toddler or young androgynous infant and had acquired wings so that there was very little difference between the Christkind and a female angel. One of the earliest representations of the Christkind that I can find is the one illustrated below. It appeared in a children’s story and picture book first published in 1848 and is clearly female, though contemporary greetings cards still often depicted Christkind as a young boy. 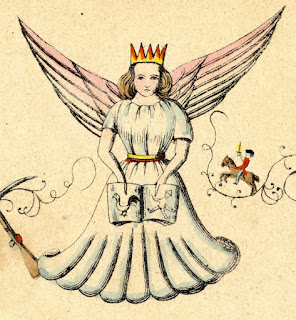 In 1933 the Nazis decided to promote the city of Nuremberg as “the Treasure Chest of the Reich”. Nuremberg was famous for several things at the time – metal work, and its annual Christmas market. Since the 16th century Nuremberg had been producing angels made out of metal foil as Christmas decorations. They were very popular and were called Rauschgoldenengel – Golden Angels. For Christmas 1933 the Nazis chose a young actress to play a Golden Angel at the Nuremberg Christmas market. They called her the Christkind. This began a tradition of choosing a teenaged girl to portray the Nuremberg Christkind every two years that continues to this day. After World War II Nuremberg influenced other German cities and towns to appoint their own female Christkind.

Outside Germany, even in Catholic nations, the original male baby Christ Child also became the Christmas gift-bringer. He is known under various names, such as Gesù Bambino in Italy, El Niño Diós in South America, and Dzieciatko in Poland.

German migrants in the 18th century took their Christmas customs and female Christkind across the Atlantic.

The generally accepted theory is that Christkind (in its variant form of Christkindl) is the origin of the name Krishkinkle. This later changed to Kris Kringle, a name you probably associate with Santa Claus. How Kris Kringle became another name for Santa Claus is also because of German migrants.

In the mid 19th century a new Christmas gift-bringer emerged in Germany. Originally a character called Herr Winter appearing in a satirical magazine in 1842, he was a bearded old man in a hooded coat carrying a Christmas tree. The princely families of Germany adopted him as a non-religious alternative to the Christkind. They called him the Weihnachtsmann (Holy Night Man). German migrants took him to America, while the German-born British royal family introduced him into the UK where he merged with Father Christmas. If you ever see a 19th century Christmas card with a Father Christmas-like figure carrying a Christmas tree, that’s actually Weihnachtsmann, even if he labelled differently.

In America the secular Weihnachtsmann adopted the Christkind’s new American name, Kris Kringle, thus changing the gift-bringer’s gender back to male. In 1821 an anonymous illustrated poem about “Santeclaus” gave the Dutch colonial Sinterklaas (St. Nicholas) a look similar to Weihnachtsmann-Kris Kringle. It was the famous illustrations of German immigrant Thomas Nast which modified the costume into a more recognisable one we associate with Santa Claus today. In this way Kris Kringle and Santa Claus merged into one. The current image of Santa was finally consolidated by another German immigrant, J. C. Leyendecker. He can be credited with ensuring that Santa Claus is depicted as the jolly fat man with a big white beard and red coat that later artists such as Norman Rockwell and the Coca Cola company copied, effectively finishing the popular practice of depicting Santa coats of other colours.

And there we have it. The Protestant Reformation turned the Christ Child into a Christmas gift-bringer. By merging with representations of angels the Christkind became female and travelled across the Atlantic to meet a fellow immigrant, Weihnachtsmann, to change gender back into Kris Kringle, and finally into Santa Claus. In effect, the Christkind, having been responsible for replacing St. Nicholas (whose name became Santa Claus), eventually merged back into him.

Next Sunday we’ll see how the female Christkind moved north, merged with a Mediterranean saint, and became a male bride.

Posted by Tony Scupham-Bilton at 09:08