As the USA celebrates the start of Pride Month and the northern hemisphere begins enters its main Pride season we look at some of the locations around the world that were the first in their region to celebrate Pride.

There is no authoritative definition of a Pride march or festival. Each Pride event is tailor-made to suit its location, but there are elements which I consider are common to most of them. These are:

1) The inclusion of the word Pride in the event’s name (a notable exception being Sydney Mardi Gras).
2) An organising committee.
3) A march or parade through public streets, consisting of more than one lgbt group, and a general community contingent, even if it’s banned or cancelled (small Prides may only manage a public gathering).
4) A celebration of diversity, inclusion and acceptance.
5) A Pride event is not held in response to a particular event or piece of legislation (e.g. the Pulse club shooting, or a protest against a specific anti-gay law) but has been planned beforehand and includes other issues. Acknowledgment of the event and legislation can take place (e.g. as the central theme). However, the earliest Prides were often organised in response to one event.

Here is a list of the first officially recognised lgbt Pride events in various global regions.

1) NORTH AMERICA
27th June 1970 - Gay Pride Week, Chicago, Illinois, USA, organised by the Chicago Gay Liberation Movement. Despite common belief the first lgbt Pride was not the Christopher Street Freedom Day Parade in New York, but in Chicago the day before. Both were held to mark the first anniversary of the Stonewall Riots. A report in the Chicago Tribune on Sunday 28th June (left) also gives us the first printed use of the word Pride in relation to an lgbt event. It also suggests that the common belief that Brenda Howard first suggested a Pride Week in New York in 1973 may not be accurate.

3) CENTRAL AND SOUTHERN ASIA
June 1977 – Love Parade, Tel Aviv, Israel. It is uncertain whether this was an lgbt event or one organised by the city’s nightclubs in which the lgbt community was just a part. In 1978 the Love Parade was, apparently, solely lgbt in make-up. The 1977 Love Parade is recognised retrospectively as the first Tel Aviv Pride by the current organising committee.

4) THE PACIFIC ISLANDS
June 1990 – Honolulu Pride, Hawaii, USA. The notoriously inaccurate Gay Star News reported last month that Fiji held the first Pride event in the Pacific Ocean on 17th May 2018. It is known that Vanuatu has held Pride-like events since July 2013.

9) ANTARCTICA
June 2018 – McMurdo Station, Ross Dependency, Antarctica. The last continent to hold an official Pride event. Contrary to what you read in the media published before the event we know from this blog alone that the Rainbow Pride flag and lgbt presence has been on Antarctica since at least 1992. See here and here. 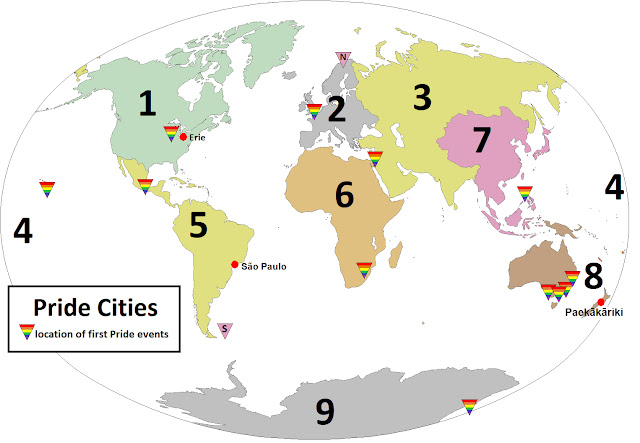 Now, here are some other Pride events of interest.

Most Northern Pride (above the Arctic Circle)
69.9 degrees north – Alta, Norway, 2010. This seems to have been the only year Alta held a Pride though it has held lgbt events since then. The most northern annual Pride, held since 2014, is Tromso Pride, also in Norway. Tromso is at 69.6 degrees north.

Most Southern Pride
51 degrees south – Falklands Pride, Falkland Islands, first held in 2013. Until the above-mentioned Pride event in Antarctica takes place the Falkland Islands holds the record as holding the most southerly Pride.

World’s Biggest Pride by Attendance
São Paulo, Brazil, has consistently topped the table for the biggest Pride. In 2006 the Guinness Book of World Records named 2006 São Paulo Pride as the world’s biggest with an estimated 2.5 million people attending. Official estimates of succeeding São Paulo Prides have risen to at least 3 million and some put the figure at around 5 million for São Paulo Pride 2017.

World’s Smallest Pride by Attendance
All Prides begin small. There can be no definitive answer. However, the Pennsylvanian city of Erie has held a Pride event almost every year since October 1998. Erie has a population of 101,000 people today, yet its Pride has never exceeded 1,000 attendees. This, over its 20 years, may make it the most consistently small Pride in the world.


AMENDMENT : Continuing research has brought to light other Prides which may be considered the smallest on a consistent basis. In Africa where many countries still kill people for being gay there have been several brave attempts to hold Pride marches. These have rarely exceeded a few hundred in attendance for fear of arrest. The first Pride Uganda events (2012-17) all had attendances in the low hundreds, and the first eSwatini (Swaziland) Pride in July 2018 attracted around 500 people. The refugee camp at Kakuma in Kenya held a Pride in Jun 2018 and could not have attracted very high numbers.
Despite the few that attended the Ugandan Prides there is one official annual Pride which is recorded as having only 3 attendees on its first Pride march. Because the location had continued to hold annual Pride marches and was not a one-off event it can be regarded as being the smallest Pride in the world. The Aomori Rainbow Parade in Japan began in 2014 with only 3 marchers. This grew to 101 marchers in 2017.
Of course, further research may uncover others.

World’s Shortest Pride March
(Excluding marches that were cancelled or banned) 21st October 2017 – Paekākāriki Pride, Paekākāriki, New Zealand. Being a small town the chances of having a large parade for the first ever Paekākāriki Pride were unlikely. Organisers decided to set the first ever record for the shortest official Pride march. The total route was 35 feet long and consisted solely of a pedestrian crossing in the town centre. Needless to say, the actual length of 200 marchers and pre-route assembly was much longer. The record has yet to be verified by Guinness.


Wherever you are, and wherever you attend a Pride march, I hope you have a Happy Pride.
Posted by Tony Scupham-Bilton at 08:40