On Track to the Outgames - Part 4 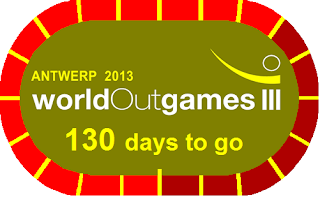 Very soon after the creation of the Gay and Lesbian International Sport Association (GLISA), the sanctioning body of the Outgames, several sub-groups were formed to cover lgbt sport in separate continents – North America, Asia-Pacific, Europe and Africa. These were also to organise smaller Outgames in their continents in the same way that the long established EuroGames had been doing in . With a large concentration of GLISA members being based in the obvious choice to try out the first of these continental Outgames was in in 2007.


Having come to that decision GLISA looked around for someone to organise the games. Luckily there were several small multi-sport events throughout that could become the central core without having to organise an event from scratch.


The ideal candidate was found north of the 49th parallel in . was the home of the longest running annual sport event in , the Western Cup, and 2007 was going to be its 25th anniversary. The tournament is traditionally held over the Easter weekend, which means that this year’s Western Cup starts in 2 days time. When GLISA approached the organisers of the Western Cup, Apollo Friends in Sport, they jumped at the chance.

Apollo: Friends in Sport began in 1987 when a group of gay men in wanted to start a sporting social group. It wasn’t long before Apollo members started talking about holding a tournament. To give an extra thrill of competition Apollo sent an invitation to a similar group in , the provincial capital, to play against them. The invitation was accepted and the first Western Cup tournament took place. There were only 3 sports held at the first one badminton, bowling and volleyball. It was a resounding success.


Over the following years the Western Cup became a popular annual fixture at Easter. Early on it attracted the attention of Tourism Calgary, who were enthusiastic supporters of the tournament. Other non-lgbt-based groups and athletes were equally as enthusiastic at becoming involved, and were (and still are) welcomed. Many straight athletes from and the have competed. Despite this popularity Apollo Friends in Sport resisted the temptation to over-push its resources too early and not produce a much bigger event. The core has always been the local community, a handful of sports, and forging new friendships.


When GLISA North America awarded the first continental Outgames to Apollo on 7th December 2006 they also envisages a conference and cultural festival to accompany it, as had happened at the first World Outgames. And so the OutRights conference and the OutFest cultural events were born. The specially created Calgary Outgames Legacy committee enlisted the help of local organisations to produce these events.


already had a highly successful annual film festival, the Fairytales International Gay and Lesbian Film Festival, and it’s organisers were asked to produce a larger events – Out Fest – to include theatre, music, art and poetry. Comedian Lily Tomlin was a headliner in a one-woman show.


The conference, OutRights, was given to the AIDS Calgary Awareness Association (on a semi-irrelevant side note, John Bonnycastle, Chair of the Board of Directors 2000-2, and nephew of a Canadian Olympic figure skater, is a fellow descendant of King Edward II). Using the Montréal Outgames conference as a template OutRights explored some of the issues raised more deeply with an emphasis on how they relate to . One of the keynote speakers was Judy Shepard, mother of Matthew who was murdered in a homophobic hate attack.


The Outgames themselves expanded on the Western Cup’s core sports. Over 500 athletes competed in badminton, bowling, curling, running, swimming, volleyball and ice hockey. Complete results for most of the sports are difficult to find (any information that will help complete my database will always be most welcome).


Centrepiece of most multi-sport events is athletics. In it was one of the smaller events. It did, however, attract runners from across . It also saw the highest-profile straight athlete take part. After the Mayor of Calgary declared a “Calgary Outgames Week” for the run of the event, it was Deputy Mayor Joe Ceci who won a silver medal in the 10 kilometre race – “There are not that many people running against me in the over-50 age category”, he said.


Following on from the success of the first North American Outgames the Western Cup tournament built on the legacy of the games. The increased publicity ensured that there was a large attendance and more social events were organised.


GLISA had little time to sit back on its laurels. The Asia-Pacific group was already gearing up to produce the first Asia-Pacific Outgames in , in 2008. These will be featured in my next Outgames post next month.

As I said earlier the 31st Western Cup is being held this weekend. I extend my best wishes to all those who are competing or attending.
Posted by Tony Scupham-Bilton at 16:36