In this special year for sport it seems appropriate that I should bring Ancient Greek sport and flowers together with the story of a tragedy in which the 2 are inextricably linked.

Many Greek states had religious festivals which included sport. The second most important in all began with a hyacinth.

I’ll only use the word hyacinth to describe the flower because it’s used more for a girl’s name than its original use as a man’s name. For the man’s name I’ll use the more accurate Greek name of Hyakinthos.

The King of Sparta had a son called Hyakinthos. The young prince had everything a Spartan athlete could ever want – good looks, great personality, excellent athletic skills, lots of older men fighting over his attention, and the most perfect god-like body ever seen on a mortal. In fact he was so good that even the gods were fighting over him, two in particular – Apollo, patron god of , and Zephyrus, the god of the west wind. Even though same-sex relationships in Ancient Greece was common in the gymnasiums and amongst training soldiers all these relationships were monogamous. But Hyakinthos was seeing both gods at the same time. The image below comes from an Ancient Greek dish shows Hyakinthos and Zephyrus together (Zephyrus is the one with wings, of course). 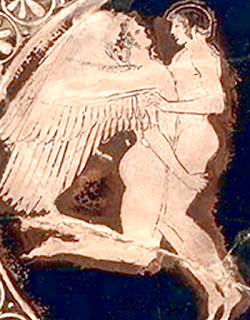 Unsurprisingly, Apollo was quite jealous, so he gave Hyakinthos an ultimatum. He must choose only one god to be his lover. The prince, bearing in mind who would be the protector of his state when he succeeded to the throne, chose to stay with Apollo.

Now it was Zephyrus’s turn to be jealous and he planned his revenge. His opportunity came at the annual festival in honour of Apollo in July.

So, on a scorching summer afternoon the great and the good assembled at the . All the young athletes lined up, naked, ready to show the crowds what they could do. High up in the sky Zephyrus saw his chance for revenge and waited for the right moment.

Prince Hyakinthos was an expert discus thrower. When it came to his turn he couldn’t resist showing off.  He launched his discus high into the air. Eager to show how good an athlete he was he raced after it as it flew across the stadium, perhaps hoping to impress Apollo by catching the discus when it bounced off the ground. But when it struck the ground it hit a rock and rebounded into the air. Zephyrus was ready to make his move and he blew the discus straight at Hyakinthos. It struck the prince squarely in the forehead, cracking his skull like an eggshell. He fell to the ground, motionless.

As blood poured from his wound and seeped into the sandy soil of the arena the spectators lifted up his limp body and rushed him into the cool air of Apollo’s . Apollo was the god of healing, so if any god could save this young man’s life then surely it must be him. But it was too late. The injury was too severe and he had lost too much blood, and as the whole of the city waited outside the temple, Prince Hyakinthos breathed his last.

The prince’s father was grief-stricken. As he descended the temple steps he could see the fateful arena where his son and heir was killed. A patch of deep crimson in the sand showed the spot where Hyakinthos’s blood had flowed, by now dried by the heat from Apollo the Sun himself. And as Apollo’s heat dried the patch of blood even darker a green shoot began to appear from its centre. Apollo’s grief was turning the blood into a flower.

Legends say that Eros was also there, weeping with Apollo at the death of his lover. From then on the new flower was named hyacinth in his honour. The king gave Prince Hyakinthos a magnificent funeral with lots of sports and contests and his remains were placed in an equally magnificent tomb at the foot of the statue of Apollo.

But the king thought a bigger memorial should be created. The following year the festival of Apollo was renamed the Hyakinthia and extended to three days.

A final twist to the tale is that the flower we recognise as a hyacinth today is not the same as that which the Ancient Greeks knew. In all probability the original hyacinth was a type of lily. It’s 3 petals symbolised royal male power all over the eastern .

The Hyakinthia festival survived into the Roman period and may have been one of the many surviving festivals banned, along with the Olympics and the Great Panatheneaean Games, by the Emperor Theodosius I in 393.

Posted by Tony Scupham-Bilton at 08:06