Today’s title doesn’t imply anger or annoyance at Pride (I’m not sure if many people still use the word “vex” in that way). I mean something else entirely. Long-time readers know I’m a vexillologist – a flag studier (deriving from “vexillum”, the name of the square flags the Romans used), and today is World Vexillology Day, a day to celebrate the world of flags. Today is also the start of LGBT History Month USA, so what better way to start the month by proudly waving your lgbt flags.

In the 21st century people have been defined more diverse genders and sexualities. Most express their diversity with their own flag, and there’s a growing number of these all the time. The Unity Pride Flag Project is endeavouring to display all known diversity flags in one huge flag. The project began in the USA after a group of friends thought about an all-inclusive flag containing all the colours of every gender and sexuality flag. Very quickly it became apparent that there were too many colours (breaking one of the “principles” of flag design, see below). Instead it was decided to have every diversity flag joined together in one long flag.

The principles of flag design were formulated by vexillologists around the world and published by the North American Vexillological Association in 2006. These aren’t legal requirements but are guidelines for good design. Here are their recommended principles:

1) KEEP IT SIMPLE. It should be easy enough for a child to copy from memory, and instantly identifiable when seen high up on a flag pole. The back of the flag should be an exact mirror image of the front.

2) USE MEANINGFUL SYMBOLISM, whether in the colours, layout or symbols.

4) NO LETTERING OR SEALS. No words. State seals are designed to be seen close-up on paper, not high up on a flag pole.

5) BE DISTINCTIVE OR RELATED. Don’t copy existing flags. If expressing a connection to an existing community make the design distinctive enough so that a difference can be seen when it is on a flag pole.

I would add two more principles:

6) BE AWARE OF PROPORTIONS. Most designs look best on a rectangle. Don’t be afraid to use square or triangular flags if it suits the design, as long as it can still be flown on a flag pole. No curved edges.

7) DO YOUR RESEARCH. Make sure your flag doesn’t already exist. Check the meaning of emblems and symbols - don’t risk abuse by designing a flag with, say, neo-Nazi symbols (take note, Extinction Rebellion).

There are many good flags that have exceptions to these principles (e.g. Rainbow Pride flag and the South African national flag), as do many flags designed before these principles were formulated.

You may not realise that international law regards flags as belonging unconditionally to the people. There are a few emblems and symbols (including the Red Cross, the Olympic rings, corporate logos, coats of arms) that are protected by law and should be avoided and not used without permission. Many young lgbt flag designers assume they own the copyright on their design. They retain credit as designer and can, if permissible, register copyright in their own country on any new symbols or emblems, but as soon as they make their flag public it becomes public property – anyone can produce their flag.

Something that really does get me “vexed” in the meaning of “annoyed” are the many examples of bad flag designs on the Unity Pride Facebook page. Many are designed by young inexperienced flag designers. Of course, not everyone can be a graphic designer and I have no quarrel with their gender identities, but very few of their flags are “distinctive”. Others are a mash-up of existing flags. It would be difficult to distinguish any of them on an actual flag pole, which makes the design (not the gender identity) pointless. The biggest failure is the long Unity Pride Flag itself. Being composed of hundreds of smaller flags makes it impracticable. If you can’t fly it on a flag pole it’s not a flag, simple as that. It’s a quilt.

Don’t get me wrong. I adore what the people at Unity Pride are doing. Anything that promotes the awareness and cultural importance (and dangers) of flags is a good thing. But, from a vexillologist’s point of view, the end result is brave but disappointing.

Another flag that has me vexed is the Unity Pride infinity symbol. The idea behind it was to show many colours of lgbt flags on the left loop. On that point alone it breaks the 3rd principle, even if it’s not compulsory. It’s the presence of the infinity symbol that is more problematic. The infinity symbol had been used as the emblem of the ethnic Métis people of Canada since 1816. In 2014 the Canadian government gave the infinity symbol protected status. It can only be used by the Métis people, or to represent them, or used in mathematics. By implication it applies to any nation outside Canada where Métis people live. Its use since 2014 by anyone else (including Unity Pride) isn’t illegal, but it IS cultural appropriation. Some places may ban the Unity Pride infinity flag because it can be seen as an abuse of the Métis emblem.

Several other uses of the infinity symbol pre-date 2014 (e.g. autism awareness and some bisexual flags) but the law is not retrospective. There are thousands of other symbols in the history of the planet that can be adopted for a flag, and many more can be created, why use one that’s already in use?

Finally, here’s a community flag designed in 2016 containing the infinity symbol that was used before it became protected. It’s an example of a good flag design. It was designed by Twainbow, an American organisation which supports lgbt people on the autism spectrum, like myself, and made its first appearance at Houston Pride. The infinity symbol was first adopted for autism awareness in 2004 by the Aspies For Freedom group in the USA. 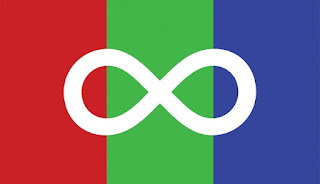 Posted by Tony Scupham-Bilton at 08:14

Email ThisBlogThis!Share to TwitterShare to FacebookShare to Pinterest
Labels: art and design, flags