80 More Gays Around the World: Part 21) Stage, Screen and Censorship

58) Jacinto Benavente was a leading figure in Spanish theatre in the first decades of the 20th century. His plays were often satirical and humorous, and it was this style which was remarked upon in the citation of his Nobel Prize.

As with Sofya Kovalevskaya, Jacinto’s sexuality is a question of interpretation and opinion. Jacinto himself shrugged off all rumours of his sexuality, but as far as I can tell, he neither confirmed nor denied them. In Spanish theatrical circles he is widely regarded as having been gay.

Spanish theatre was, naturally, centred in the nation’s capital, Madrid. The major theatre in the city at that time was the Teatro de la Princesa – the Princess Theatre. By 1908 the theatre was owned and managed by a renowned actress Maria Guererro. In the first year under her management it premiered one of Jacinto’s plays, and did so again in 1913, 1914 and 1919. In 1931, three years after Maria Guererro’s death, the Princess Theatre was renamed in her honour.

Jacinto Benavente became a reluctant supporter of General Franco’s regime after the Spanish Civil War of 1936-9. He regarded Franco as the lesser of two evils (fascism and socialism). However, Franco imposed strict censorship on the performing arts and Jacinto decided not to write for many years after it was introduced.

Franco set up the National Propaganda Service. One of the new state censors was 59) Luis Escobar Kirkpatrick (1908-1991). On his father’s death in 1954 Luis inherited the title of Marquess de las Marismas del Guadalquivir. Like Jacinto Benavente Luis Escobar would probably have described himself as a liberal monarchist. Neither were very enthusiastic in their support of Franco’s regime. A friend of Luis because Head of the National Propaganda Service and it was he who appointed Luis as Head of the Theatre and Music Department in 1938. However, neither stayed in their position very long. Both were suspected of non-compliance in their duties and dismissed. In his memoirs Luis admitted that he would usually “okay” each page of a submitted script without reading it.

During his year-long stint as a state censor Luis Escobar was also given the task of setting up what became the National Theatre of Spain. He established a core set of plays from what the Spanish termed their Golden Era, which included those of Jacinto Benavente. In 1940 Luis was appointed director of the Maria Guerrero Theatre.

Luis Escobar was also an actor. He appeared in many television dramas and series, and in a handful of films. He also directed several films, including “La Honradez de la Cerradura” by Jacinto Benavente in 1950 which was nominated for the Grand Prix at the Cannes Film Festival. 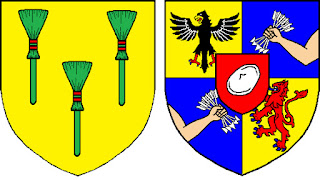 The common feature isn’t apparent without some knowledge of heraldry. Both coats of arms are what are called allusive. They allude to the owner’s names. Luis Escobar’s ancestors adopted brooms was their arms because the Spanish word for a broom is “escoba”. The allusive nature of Nicole Stéphane’s arms in less apparent until you learn that her full name was Baroness Nicole Mathilde Stéphanie de Rothschild. The name Rothschild translates as “red shield” or “red badge”, and this is alluded to by the little red shield in the centre of their arms.

Nicole Stéphane belonged to the French branch of the Rothschild family. Her father, uncle and cousin were also actors, writers and directors. Nicole was nominated for a Bafta (British Oscar) as Best Actress in a Foreign Film for her second film “Les Enfants Terribles” (1950). Nicole’s last acting role was in “Carve Her Name With Pride” (1958).

A serious car accident left her unable to walk and speak for a while and she never fully recovered. It was for this reason that she turned to film production and direction. Although she made several successful films her dream was to film Marcel Proust’s novel series “A la Recherche du Temps Perdu” (Remembrance of Things Past). She acquired the film rights in 1962 and many in the profession thought it was unfilmable. After many struggles over funding and scripts the first film in the series, “Swann In Love”, was produced in 1984. No others were made.

I had originally thought of continuing this “80 More Gays” sequence with Marcel Proust himself, but before I do that I want to take a little detour.

Through Nicole’s family connections she managed to arrange for part of a future film in her “Remembrance of Things Past” series to be filmed at a family mansion, the Château de Ferrières. This belonged to another branch of Nicole’s family and was built for her 3-times-great-uncle James. One of James’s grandchildren, who was very familiar with the château, was Baroness Hélène de Rothschild, known by her married name of 61) Hélène van Zuylen (1863-1947).

Next time on “80 More Gays”: We race across northern France and soar into the skies with a couple of heroes before landing in Morocco to return to Marcel Proust.

Posted by Tony Scupham-Bilton at 07:54