The Godmother of Egyptology

Today is International Archaeology Day. Arguably the most influential archaeological subject is Egyptology. The names of ancient pharaohs and gods are household names. It has influenced everything from Napoleonic furniture to Hallowe’en costumes. Hundreds of films and books based on ancient Egypt are highly popular.

Last Hallowe’en I revealed how the curse of the Egyptian mummy was created by the most popular Victorian novelist, the bisexual Maria Correlli (1855-1924). The establishing of Egyptology as a separate science owes a great deal to another Victorian queer novelist, the openly lesbian Amelia Edwards (1831-1892).

Amelia Ann Blanford Edwards was the only child of Thomas and Alicia Edwards, a retired army officer and the daughter of an Irish barrister. Amelia was home-schooled by her mother and governesses and was a prodigious child, writing poetry and stories before she was 14 years old. She was also a very talented artist, a skill she would later utilise to illustrate her popular travel books.

Amelia’s popularity as a writer began long before her interest in Egyptology. Her fiction – novels and short stories – made her a celebrity to rival Maria Correlli (both outsold Charles Dickens). I’ll return to Amelia’s fiction writing in December, specifically her ghost stories, but for today let’s concentrate on her “Egyptian period”.

Amelia came from an era and social background in which well-educated, reasonably well-off ladies like herself would travel around Europe with a female companion. One year, 1873, she and a companion were in France during a particularly miserable wet summer, so they decided to head south to warmer climes and Egypt. Amelia was instantly entranced by the whole Egyptian culture. She sailed up the Nile with a group of fellow travellers to Abu Simbel (in its original location before being relocated block by block in the 1960s).

Amelia discovered a small chamber buried in the sand and proceeded to records its contents and draw the vivid wall paintings in her sketch book. Amelia wrote up her Egyptian experiences in published them in “A Thousands Miles Up the Nile” in 1877, containing many of her own drawings, including the one below of Abu Simbel. This book is probably the biggest best-seller she ever wrote. 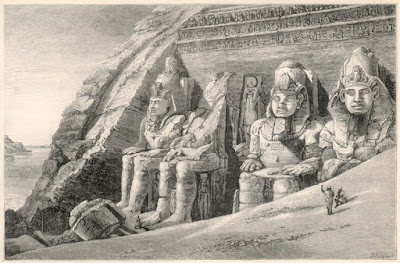 As with the majority of European travellers to Egypt Amelia collected and bought many ancient artefacts, including several mummified hands. It wasn’t long, however, before she realised the danger of this popular “hobby”. In her book she wrote that many Egyptian site were being spoiled or destroyed by the actions of travellers and tourists and the neglect of local authorities.

At that time in Egypt’s history the country was in economic decline and couldn’t afford to pay for serious excavations and research. In 1882 Amelia banded together with Reginald Stewart Poole, the Curator of Coins and Medals at the British Museum, to found the Egypt Exploration Fund. Both were elected honorary joint secretaries. Donations trickled in and by January 1883 the fund was able to send its first expedition to Egypt.

One of the archaeologists to benefit from the Fund was Flinders Petrie, who would go on to become Britain’s greatest Egyptologist and founder of modern archaeological methods. He and Amelia became firm friends and in her will Amelia ensured that Petrie would be the first person to be appointed the first ever Professor of Egyptology.

The appointment has a very interesting back story. Amelia, being a woman in Victorian England, found it difficult to get support from the male-dominated academic and scientific establishment. She got no help from the British Museum other than the voluntary assistance from Reginald Poole. At the time of her death University College London was the only institution which offered and gave the same degrees to woman as it did to men. Amelia laid down in her will that £2,500 should go towards setting up a chair in Egyptology there – as long as it wasn’t held by anyone from the British Museum. Shortly before her death, when she became seriously ill, she added a clause stipulating that the post should not go to anyone over the age of 40. Flinders Petrie was 39 and the only experienced archaeologist who fit the criteria.

Apart from being hugely popular for her Egyptology, travel writing and ghost stories Amelia also enjoyed an equally hugely successful lecture tour of the USA in 1889-90. This raised a lot of money for the Egypt Exploration Fund.

Amelia spent her last years in a little village called Westbury-on-Trym with her partner and companion Ellen Drew Braysher (1804-1892). They were buried together in Henbury near Bristol, their graves later being designated Grade II listed status. Historic England, the country’s leading heritage organisation, placed the grave on their Pride of Place list of significant lgbt sites in 2016.

As well as leaving £2,500 to University College London for the chair in Egyptology Amelia also left them her personal collection of artefacts and library. They formed the basis of what is now called the Petrie Museum of Egyptian Archaeology. Obviously, it is named after Flinders Petrie, or Sir Flinders Petrie as he became, but the museum would not exist at all if Amelia Edwards hadn’t given her collection to found it. It annoys me that the museum isn’t named after her.

The Petrie Museum has long been a place I have wanted to visit. Back in 2010 it produced a special museum trail called “Beyond Isis and Osiris: Alternate Sexualities in Ancient Egypt”. Although comparatively small in area the museum has thousands of items on display and the trail picked out 14 of them that illustrate the variety of sexual and gender attitudes among the Egyptians, from their ancient gods to Alexander the Great.

The trail originated in a series of talks given in February 2008 for LGBT History Month UK by John J. Johnston, who was a teaching assistant at University College London while studying there for a PhD in Egyptology. The talks proved so popular that Johnston formed them into the “Beyond Isis and Osiris” trail. Below is a video of Johnston talking about his trai. Johnston became Vice-Chair of the Egypt Exploration Society (to which the Egypt Exploration Fund had been renamed in 1919) shortly afterwards and held the position until 2015.

Perhaps when covid restrictions are lifted and we can move around freely once more I’ll finally make it down to London and visit the museum founded by Amelia Edwards, the woman known as the Godmother of Egyptology.

Posted by Tony Scupham-Bilton at 07:37