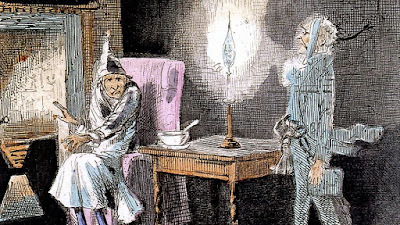 One of the constant elements of a 21st century Christmas is the classic ghost story “A Christmas Carol” by Charles Dickens. Ever since it was first published in 1843 it has become a feature of the British Christmas.

Many adaptations have been produced over the years, though the original version remains at the top of the list. Even in the 21st century public readings of the original story are popular, and no more so than those performed in the UK by the gay actor Simon Callow (b.1949). Because of the popularity of his readings of “A Christmas Carol” Simon even got to play Dickens in two episodes of “Doctor Who”. The first was in the 2005 episode “The Unquiet Dead” which, even though being set on Christmas Eve 1869, was actually broadcast in April. I often watch it again with all the other Doctor Who Christmas Specials. Simon’s second Doctor Who appearance was a cameo part in the episode “The Wedding of River Song” (2011).

Film versions of “A Christmas Carol” are many and varied. They range from the 1938 version with Reginald Owen as Scrooge to the contemporary setting of “Scrooged” starring Bill Murray (my favourite modern retelling of the story). Many more contemporary version abound, usually appallingly bad and made by the Hallmark channel. One of the best and most often screened version is the more traditional “Scrooge” (called “A Christmas Carol” in the US) made in 1951 with the wonderful Alistair Sim as Ebenezer Scrooge.

The film was directed by Brian Desmond Hurst (1895-1986), an openly gay Irishman who is virtually forgotten today but who directed several other popular British films like “Dangerous Moonlight” and “Tom Brown’s Schooldays”.

Brian’s background reads like a typical Charles Dickens novel. He was born into Victorian poverty and baptised Hans Moore Hawthorn Hurst. He was the seventh child of a poor metalworker in the Belfast shipyards. Brian’s mother died in childbirth three years later and his father remarried. Brian’s new stepmother had a daughter from a previous marriage and she made no attempt to show favour to her daughter and the subsequent three children she had with Brian’s father.

Brian’s father was often unemployed and moved around the shipyards of Northern Ireland to find work. The strain of supporting his large family led to bouts of alcoholism. One of the last jobs Brian’s father was involved with was the construction of the Titanic.

Brian joined the 10th (Irish) Division of the 6th Royal Irish Rifles during World War I. During that war he changed his first name from Hans to Brian to sound less German and more Irish. Brian’s first major posting was to Gallipoli, where half of his battalion were killed in the battle.

After the war Brian lived in Canada, partly to escape the “Irish Troubles”, as the militant independence campaigns were called. In Toronto he studied journalism. There he dropped his middle names, Moore Hawthorn, in favour of Desmond, another traditional Irish name.

So, as Brian Desmond Hurst he went to the US and managed to work as a scenery designer for the great Hollywood film director John Ford (himself of Irish parentage). Through Ford Brian gained experience in the cinematic processes and the two remained life-long friends.

Back in the UK Brian began making short films. He tried to get backing to found an Irish film industry but was unsuccessful. During World War II Brian was recruited by the British government to make short propaganda films. One of several feature-length films he made during this period was “Dangerous Moonlight” (1941), one of the most popular British films of that period. Brian’s own favourite war-time film was “This is the Glory” (1946), a documentary-style reconstruction of the Battle of Arnhem. It was the highest grossing war film until the mid-1950s.

By now Brian was a highly sought after director and he continued to produce popular films, and in 1951 he directed “Scrooge”. This was just one of a series of film adaptations of Dickens’ novels that were being made by various British studios and directors.

Brian Hurst’s “Scrooge” wasn’t an exact adaptation of the story. Scrooge’s life story was expanded, and there is a feel of film noir about it. Perhaps the great success of the film, and the only thing that most British people remember, is the portrayal of Scrooge by one of the UK’s best loved character actors, Alistair Sim.

The success of “Scrooge” has overshadowed Brian Hurst’s other work, though I don’t think he had any problem with that. In the 1950s and 60s the British film industry was turning away from the type of film Brian made and he gradually turned somewhat reclusive. Towards the end of his life he enjoyed a resurgence of interest in himself and is films. The British Film Institute celebrated his 80th birthday in 1975 and several plaques were erected in his name in both England and Ireland. A sort-of biography was published after his death called “The Empress of Ireland”. He is gradually making his way back to the top tier of the best British and Irish film directors of all time.

Brian Hurst’s “Scrooge” is being broadcast on British television several times on different channels this Christmas, even several times on the same channel. If you see it advertised where you live have a look at it, if you haven’t seen it before.

All that’s left for me to say is Merry Christmas, but before I go I’ll let you know that my next article on New Year’s Eve will feature, at last, my list of lgbt Olympians, which now stands at 427 names.

Posted by Tony Scupham-Bilton at 07:50