80 More Gays Around the World: Part 25) Friends and Betrayal

After over 40 years service in the British army as a pioneering surgeon 71) Dr. James Barry retired to London where he died. His body was laid out in preparation for burial by a woman called Sophia Bishop. It was she discovered that James Barry was physically female and had successfully hidden this secret from the army for decades. When Sophia was refused payment for her services she took the secret to the press.

The revelation that one of the most revered army surgeons was born a woman caused quite a stir. The army were so embarrassed that they tried to suppress James Barry’s military records for a hundred years. Their attempt failed and the world got to know James Barry’s secret.

James Barry was baptised Margaret Ann Bulkey in Ireland. From adulthood he lived as a man. This suited James’ father who managed to enrol him into Edinburgh University as a medical student in 1809. Women were not allowed to study medicine in those days.

James qualified as a doctor in 1812 and enlisted into the army a year later. He rose very quickly to become Assistant Surgeon to the Forces in 1815. This position gave James the chance to travel the world. His first posting was to Cape Province in South Africa where he became Colonial Medical Inspector. In this role he went to the leper hospital at Hermanus (the location of the present Hamilton Russell wine estate) and immediately set about improving health care and hygiene practices.

James had a reputation for voicing his opposition to many established medical practices wherever he went. He even had a big row with Florence Nightingale during the Crimean War over hygiene (she then stole his ideas and passed them off as her own).

By the time of his death James Barry was well-known and respected, and all because his father enrolled him into Edinburgh University all those decades earlier. Others also kept his gender a secret. One of the family friends was a Venezuelan revolutionary called Francisco de Miranda. The original plan may have been for James to act as governess to Miranda’s children, perhaps in Venezuela, before he made his decision to become a doctor. James wouldn’t have become such a famous figure in the medical world if he had gone to Venezuela because South America was in a state of turmoil as colonies began revolting against their Spanish and Napoleonic rulers. Francisco de Miranda laid the foundations for the liberation of much of South America, assisted by compatriot revolutionaries such as a Simón Bolivar and 72) Carlos de Montúfar (1780-1816).

Carlos’s relationship with the German explorer Alexander von Humboldt is mentioned here. After he and Humboldt went their separate ways Carlos entered the Spanish army and fought in several battles against the Napoleonic French. In 1810 he sailed back to his native Ecuador, a Spanish colonial province then called the Quito Audiencia. There he joined the independence movement with his father, the Marques de Selva Alegre.

In 1812 independence was declared under the name of the Autonomous Government of Quito with Carlos’s father as President. However, a few months later Spanish loyalist troops took Quito city and the revolutionary government, including Carlos de Montúfar, fled. Eventually Carlos joined Simón Bolivar in his independence campaigns in Colombia but was captured at the Battle of the Cuchilla de Tambo in June 1816. The following month he was executed. 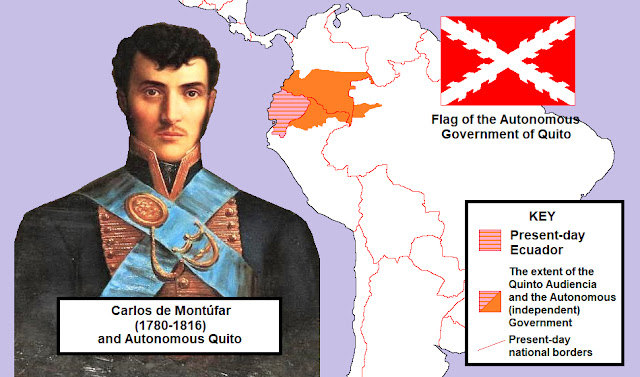 Simón Bolivar went on to become the big hero of South American independence, even having the country Bolivia named after him, of course. Strangely, Bolivia attracted many German settlers. Their descendants are recognised as a separate ethnic community to this day.

In the 1920s Bolivia decided to call upon Germany to help them reorganise their army. One of the military instructors that was sent was 73) Ernst Röhm (1887-1934), one of Adolf Hitler’s close friends.

Ernst arrived in Bolivia in January 1929. He was disappointed that a recent conflict with Paraguay has been resolved before he arrived and he was often at odds with his commanding officer, Gen. Hans Kundt. Shortly after his arrival a coup supported by Kundt deposed the Bolivian president. Ernst was rumoured that the new president had chosen him to replace Kundt, but before that could happen Ernst received a letter from Hitler ordering him to return to Germany. If only he had stayed in Bolivia.

What attracted Ernst back was the promise of becoming Chief of Staff of the SA (Sturmabteilung, the Storm Battalion, known as the Brown Shirts), the Nazi’s paramilitary wing which Ernst had helped to found in 1921. By 1934 the general reputation of the SA had deteriorated to the status of armed thugs and Hitler decided to scale back its powers.

Heinrich Himmler and Reinhard Heydrich, the Chief of the SS Security Service, fabricated documents against Ernst Röhm, suggesting that the SA were planning to overthrow Hitler. Most of this evidence centred on the alleged activities of the many known gay members of the SA. Hitler knew Ernst was gay and was at first reluctant to believe the evidence. What resulted was the “Night of the Long Knives”, a pivotal event in the history of the rise of Hitler.

On 30th June 1934 Hitler and SS troops arrested Ernst Röhm and the SA leaders in a surprise attack. After some procrastination Hitler ordered the execution of Ernst two days later. Following the Night of the Long Knives Hitler strengthened Paragraph 175, the law criminalising homosexuality, and Hitler assumed more power.

Reinhard Heydrich, the co-author of the fake documents, became Protector of Nazi-occupied Bohemia and Moravia (modern-day Czech Republic). Czech rebels murdered Heydrich in 1942 and Hitler retaliated by ordering the execution of every man in the village of Lidice, where he claimed the assassins had been harboured. The “Lidice Massacre” horrified the world. Some places still commemorate it to this day. One commemoration was a verse-play called “The Murder of Lidice” and it was written by 74) Edna St. Vincent Millay (1892-1950).

Next time of “80 More Gays”: How a village was destroyed, how reputations were built, and how civilisations were revealed.

Posted by Tony Scupham-Bilton at 08:04