This is a very personal entry, a reflection on my research over the years into lgbt Olympians. If this was an ordinary year I’d be finalising my lgbt Olympian statistics, detailing which athletes had made their debut at the Tokyo games, which ones were the most successful, which had made the biggest impact, and which ones went up or down in the all-time medals table. This will all have to wait until next year. That doesn’t mean that my research has to stop.

Back in July when the Tokyo Olympics should have started I gave a list of statistics as they stood on the planned date of the opening ceremony. The list of lgbt Olympians stood at 391. This had been a big jump since the announcement of the postponement of the games on 24th March. On that day I had 385 names on the list. This gave me optimism in reaching 400 names by the time up the opening ceremony in July 2021.

So, I was very surprised and delighted when I identified and verified the 400th athlete to add to my list on 3rd November.

On several occasions in the past when I have identified one athlete the research has led on to reveal several others. This is how I managed to reach 400, and there are many more names that have cropped up which I am slowly going through and may be added to the list after more research. This has put me in a position where I can say that, if I can verify the gender identity and sexual orientation of each name, and that is by no means certain, then I will have a full list of 450 lgbt Olympians before Tokyo 2020 begins.

After placing the 400th name to my list I contacted Cyd Zeigler of Outsports.com. We have been in contact for several years and he has helped enormously in reaching this milestone. I thanked him for his work, contribution and assistance over the years. He invited me to join him on one of his podcasts to talk about my work, and this will be broadcast on Monday, 23rd November. Check the Outsports website for details.

I’ve never really been sporty, but the Olympics have been around since the day I was born, two months before the Rome 1960 Summer games and a month before the start of the torch relay.

Whenever the Olympic Games, or the Paralympics or the Commonwealth Games, were taking place the family were always watching it. Back in 2016 when I was halfway thought my “Olympic Alphabet” series I wrote about my early recollections of the Olympics and the scrapbooks I made for the 1976 summer and winter games. One fact I gave in that article is worth repeating – there has never been a summer or winter Olympic Games in my lifetime – 60 years - where there has not been an lgbt competitor, even if they were not openly so.

So, what started me on compiling lists of lgbt Olympians? Probably the 2004 Athens Olympics. Both the “Gay Times” and “Pink Paper”, the leading UK lgbt magazine and newspaper respectively at that time, mentioned there were 11 of them. I kept that fact at the back of my mind. The 2008 Beijing Olympics weren’t on my mind for personal reasons, but I was back in Olympic mood for my all-time favourite Winter Olympics, Vancouver 2010. As we approached London 2012 I thought it would be a good idea to write an lgbt history of the Olympic Games for this blog, which I had just started. To begin the research I needed to gather together every name of lgbt Olympians I could find.

All through 2011 I researched and compiled my history and began serialising it on this blog from 14th January 2012. Of course, a lot has happened since then and that original history is very much out of date. Given enough time I’d like to update it.

One of the most significant finds during my early research was the Outsports website. They had a list of 137 openly lgbt athletes and sportspeople. Not all of them were Olympians but it formed the basis of my first list. As I said earlier, the founders of Outsports, Cyd Zeigler and Jim Buzinski, have been extremely helpful and supportive.

The published lists have become very popular. Several media websites have referenced my blog and, to my dismay, I am even used as a reference source on Wikipedia. My lists have never been intended to be authoritative and I would prefer people would go to original sources. Wikipedia may give names of lgbt Olympians but very little in the way of evidence. Similarly, sport fan forums often give names by no source, most of the time they give unsubstantiated rumour, so I don’t add any name to my list unless I can find definitive evidence of an athlete’s sexuality or gender identity.

Every Olympic year I have requests for interviews, and I have been contacted by several lgbt Olympians who had asked to be put their names on the list. There have also been a couple of lgbt athletes who have requested not to be named. My research led to me becoming a member of the International Society of Olympic Historians, the only historical society approved by the International Olympic Committee. In August 2018 my research was used at the Pride House in Glasgow during the European Athletic Championships. It was turned into a pathway leading through the entrance (pictured below). 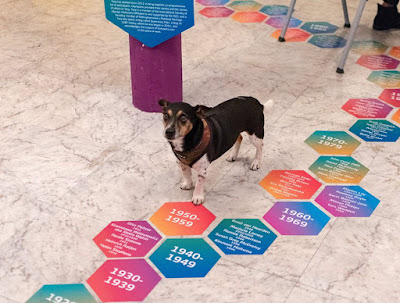 So that’s the history of my lgbt Olympian list. Originally I also included lgbt Paralympians, but the lists are getting so long that I find it difficult keeping up with both. This is why I am stopping my list of lgbt Paralympians so I can concentrate on the Olympians. I hope there is someone out there who will carry on the Paralympic side of sport.

As I’ve said to one of my friends on several occasions, history is always changing. By that I mean that every new name or detail that comes to light changes our perception or understanding of what has happened. Each new historic name I place on my list changes the history of lgbt Olympians. What is certain is that the list will never be complete. There will always be athletes who come out as new members of the lgbt community, but there will also be others whose sexuality will have gone with them to their graves.

I’ll leave you with this thought – recent research has uncovered about 50 new names for me to look into, and I am on track to have a list 500 lgbt Olympians by the time of the 2022 Winter Olympics in Beijing, and that’s only 27 months away.

Posted by Tony Scupham-Bilton at 08:11

Email ThisBlogThis!Share to TwitterShare to FacebookShare to Pinterest
Labels: Olympics