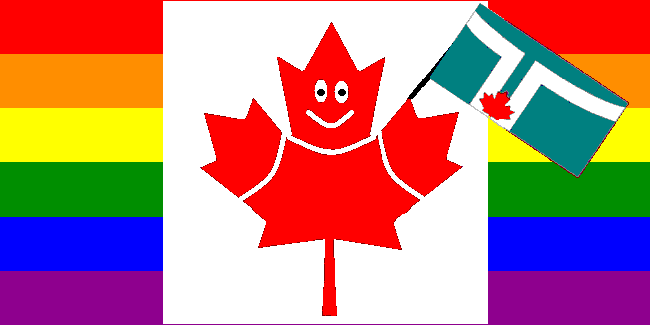 This week WorldPride is taking place in Toronto, Canada. Oh, how I wish I could be there! I consider Toronto to be one of my “ancestral” homes. My grandfather and his brothers lived in and around Toronto at the start of the 20th century. My grandfather returned to the UK in 1911 and had loved his life in Canada so much that he named his house after the village where he had lived – Newton Brook. It still has this name and my eldest brother still lives there. When my father got married in 1952 and my grandfather moved out and built a bungalow next door he named it after another Toronto village he knew – Willow Dale. It was in Willow Dale that my grandfather died in 1979 at the gage of 101. His brothers remained in Canada and their families, my cousins, still live in Toronto.


The villages on Newton Brook and Willow Dale are now suburbs of the largest city in Canada (as Newtonbrook and Willowdale). The lgbt history of Toronto hasn’t touched either place very much over the past 100 years. Most of it has been based further south in the larger old settlement areas. Being largely residential areas there aren’t the usual gathering places associated with city centres though you can get occasional glimpses of lgbt heritage.


Take, for instance, the United Church of Canada. The church in Newtonbrook was the place of worship of Ruth Bramham, the first transgender member of the United Church’s lgbt network Affirm United. She is also a director on its National Board. Another lgbt church member who lived in Toronto for a while is Rt. Rev. Gary Paterson who became the first gay leader of a Christian church in Canada when he was elected Moderator of the United Church in 2012 (he is married to Vancouver councillor Tim Stevenson who was part of the Canadian delegation to the Sochi Winter Olympics).


The widely recognised Gay Village of Toronto is further south in the main metropolis. The area is called Church and Wellesley, after Church Street and Wellesley Street which cross in the heart of the district. This has long been the location of Toronto Pride and is where WorldPride is being held.


In one of those weird turns of historical events Church and Wellesley provides a direct link back to one of the earliest gay scandals in Toronto. Way back in 1820, less than a decade after the settlement was founded, a local magistrate called Alexander Wood owned an estate which covered part of the present Church and Wellesley area. The scandal arose when he was accused of misusing his powers as a magistrate by ordering local men to show him their private parts, ostensibly for inspection to identify a rapist.


Since to 1970s Church and Wellesley has become the lgbt hub of Toronto. In 1991 the area elected the city’s first openly gay councillor, Kyle Rae, and after his retirement his successor was the fist openly lesbian councillor, Kristin Wong-Tam. Toronto provided the first openly lesbian provincial Premier in 2013. Kathleen Wynne replaced the then leader of her party and Premier of Ontario. She won the provincial election for the post in her own right just a few days ago.


In the world of art and culture one of the most significant people to put Toronto onto the art map was Douglas Duncan. He was a wealthy heir who in 1936 opened an art gallery in which he showcased many up-and-coming Canadian artists. Like many he led a closeted gay life during this period when homosexuality was illegal. A hint to his sexuality was made at his memorial service when one artist remarked that Duncan had done a lot for female artists but didn’t actually love women.


Canada was one of the first countries to introduce same-sex marriages and Toronto was the location of the first. On 14th January 2001 in the Metropolitan Community Church Kevin Bourassa and Joe Varnell, and Ann and Elaine Vantour, were married. Their fight to have their marriages legally recognised is told here. Just hours after the ruling in 2003 which recognised same-sex marriages another Toronto couple, Michael Stark and Michael Leshner, became the first same-sex couple to be married.


The University of Toronto is home to the Mark S. Bonham Centre for Sexual Diversity Studies. As well as providing research courses for students and organising conferences the Bonham Centre also publishes the most comprehensive (and reliable!) online list of lgbt people on its website Queerbio.com.


I hope everyone has a good time at WorldPride and wish I could be there to visit my “ancestral” home.
Posted by Tony Scupham-Bilton at 08:23

Email ThisBlogThis!Share to TwitterShare to FacebookShare to Pinterest
Labels: Prides