In a week’s time the month of June arrives. In the June has been called Pride Month. To celebrate I’m going to present a series of posts on something you always see at a Pride event – gay flags. 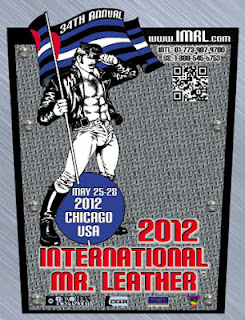 There seems to be new lgbt flags being designed all the time, particularly on the internet, and being a vexillologist (a flag studier) I find it hard to keep up at times. To give you a taste of what’s to come next month I’ll begin today with a look at one of the most familiar lgbt flags – the Leather Pride flag. Why? Well, today the finals of the International Mr. Leather contest are being held in , and the leather flag was designed specifically for it.

The flag was designed by Dr. Tony DeBlase. He was born in 1941 in . By profession he was a museum administrator and zoologist, earning his PhD with a dissertation on bats. In his 30s he began writing stories and articles with a leather/S+M theme under the name Fledermaus – the German for bat. In 1991 Dr. DeBlase co-founded the Leather Archives and Museum, of which he was Vice-President from 1992 till his death in 2000.

In the run-up to the 20th anniversary of the Stonewall Riots in 1989, Tony felt that the time was right for leather men and women, who had been taking part in gay pride marches for years, to have their own flag. The first Leather Pride flag appeared on 28th May 1989 at the International Mr. Leather finals in . It was intended as just a proposal but it was accepted immediately. In fact, within a few days Tony got a phone call from Susan Shepherd, the newly crowned International Ms. Leather. She wanted to take the flag with her to the Gay and Lesbian Pride parade in , a couple of weeks later.

From then on the Leather Pride flag has inspired a huge number of other flags used by the leather community as well as the bondage and S+M communities. Its colours are used for the winners sash in the leather contests.

Posted by Tony Scupham-Bilton at 09:10